The Case of the Vanishing Job Offer at Rolling Stone

After two years of wondering, a writer learns why a staff position she had accepted was abruptly rescinded

It was a hiring horror story. The Wall Street Journal reported this past February about a job offer Refinery29 writer Kate Lindsay received in early 2019 from Rolling Stone to be a staff writer covering politics for their website. Lindsay countered, asking for $10,000 more than the salary in her offer letter, but was told by human resources that there was “no room to budge.” She accepted the initial offer anyway, put in notice at Refinery29, but then three days later was told the offer had expired. It was, in The Journal’s telling, a cautionary tale about the “hidden pitfalls” of salary negotiations.

Recently though, Lindsay told The Fine Print, she heard from someone who was aware of her Rolling Stone hiring process and wanted to tell her why the job offer had mysteriously vanished. “This was something that truly plagued me for so long, so when I finally was going to find out, my heart was pounding,” she said.

“What I was told is that when I went to negotiate, I used quote-unquote ‘union language’ that set off alarm bells. And so they went looking through my social media and saw that I was active in Refinery’s union and then rescinded the offer.”

Around the same time as her job offer from Rolling Stone, the editorial staff of Refinery29 had unionized with the WGAE. Lindsay had supported the union on social media, posting tweets like, “feeling ORGANIZED! #R29” and a selfie on Instagram showing off one of the new union buttons. 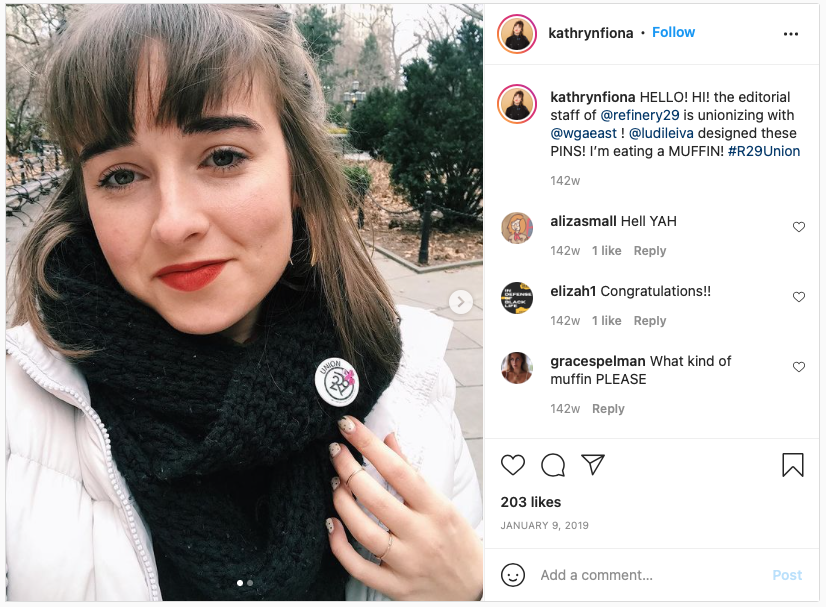 The Fine Print corroborated Lindsay’s account of her conversation with the person she spoke to. “H.R. wouldn’t let us hire anyone who said anything about unions. It made it difficult to hire talent,” this person told us.

As they did with The Journal, PMC declined to comment to us on why Lindsay’s job offer was rescinded.

WGAE executive director Lowell Peterson said in a statement, “It is unlawful for an employer to discriminate against someone based on their union activity, a/k/a ‘protected concerted activity,’ which includes pro-union communications like tweets. Rescinding a job offer is a classic form of blacklisting, which is intolerable in a democratic society.”

Two other writers we spoke to said they were also left puzzled when what seemed like promising job talks at Rolling Stone ended without explanation. One of them, Anna Merlan, now a senior staff writer at Motherboard, went through a hiring process in the fall of 2018. “I went through a few rounds of interviews at Rolling Stone but wasn’t offered a job. I wasn’t given a specific reason,” she said.

Rolling Stone, founded by Jann Wenner amid the 1960s counterculture, has often hired from a pool of editors and writers who align themselves with progressive politics. While many New York newsrooms are now represented by the WGAE or NewsGuild — including at Hearst, Vox, BDG, BuzzFeed, and Condé Nast — former Rolling Stone staffers said that unionizing there has been a sensitive topic. They said a small group started organizing in 2018, circulating salary transparency surveys and reaching out to the WGAE, but that the effort has mostly fizzled out.

The magazine is now owned by Jay Penske, a famously private and eccentric heir to a billionaire. His approach to management tends toward benevolence and personal gestures. As he amassed a publishing empire that now includes Billboard, The Hollywood Reporter, Variety, Vibe, Robb Report, and Women’s Wear Daily, Penske is known for meeting one-on-one with every employee at new publications he’s acquired. Another Penske signature is the PMC Angel Fund, used to distribute money to employees undergoing medical or personal hardships.

Around the time Lindsay’s job offer was pulled in 2019, PMC asked employees to sign a statement showing they acknowledged a newly updated version of their employee handbook, which included an addendum titled “UNION STATEMENT.” It begins, “At PMC, we’re not anti-union.” However, it concludes, “In the end, because our shared ideals for journalistic excellence bind us together and because PMC requires the necessary focus and agility to succeed in overcoming the economic challenges ahead, we do not need the interference of others. Thus, we hope that you see there is no need for a union at PMC. It is your choice. Though we hope that if the question of union representation does ever arise here at PMC or any of PMC’s individual brands, that you choose ‘no.’”

Last year, PMC instituted a pay floor — a $25 minimum hourly wage or a $52,000 minimum salary — for all employees across the company.

In the two years since the yanked job offer, Lindsay, who has since co-founded the newsletter Embedded and writes for Study Hall, said she had blamed herself for the missed opportunity at Rolling Stone. So, it was a relief to learn that it was “not something I could have done differently or better,” she said. “I stand behind being in the union. And I also think it’s really gross to disqualify people from being hired because they were in a union.”