By The Fine Print

As our quants watched a flurry of bets come in during the second week of The Fine Print’s New York Times Succession Betting Pool, they started worrying that their initial algorithm wouldn’t be able to handle the new volume of betting. So they fully refactored their code, augmented the AI framework, and fed the mass of new data to it. With an uncanny valley wink and a nod, the new algorithm gave us a fresh set of odds.

If you haven’t already, place your own bets!

Continuing last week’s trend, managing editor Joe Kahn (+200 ▼75) isn’t seeing the betting action you’d expect for someone we, and everybody else, has been calling the overwhelming favorite to be the next executive editor of The New York Times. A few big bets have been placed on him, but for the most part, an eerie silence has settled over the Kahn wager column. The algorithm still gives him the best chances of succeeding Dean Baquet, but after an opening line that gave him a better than 50 percent chance, he’s slipped again, this time to 33 percent.

Meanwhile, the competition to be the leading not-Kahn contender only got stiffer this week. Odds on deputy managing editor Cliff Levy (+750 ▲250) got shorter, but not enough to stave off the steadily rising tide of deputy managing editor Carolyn Ryan (+750 ▲500) and assistant managing editor Marc Lacey (+1500▲750), who both pulled even with Levy. Even so, Ryan, Lacey, and Levy should keep an eye out for the candidates in the third tier, deputy managing editor and deputy editor, publisher’s office Rebecca Blumenstein (+2000) and opinion editor Kathleen Kingsbury (+2000), who are both still attracting heavy wagering and remain aspirants to watch.

This week, the other big change is that former Times associate managing editor and current managing director of Gimlet Media at Spotify Lydia Polgreen (+3000 ▲1000) is on the rise. Polgreen has been one of the most popular longshots since the start of betting, but a big swing of bets this week forced the algorithm to take the trend seriously. Like Blumenstein’s big jump last week, it’s not clear whether this is a momentary blip or a steady trend. Or maybe our AI just loves the prospect of a good plot twist, as Polgreen sweeping back into The Times at the top would be an exciting, if unlikely, outcome.

While all individual bets are confidential, here’s where the OTR$ bucks wagered so far have gone. 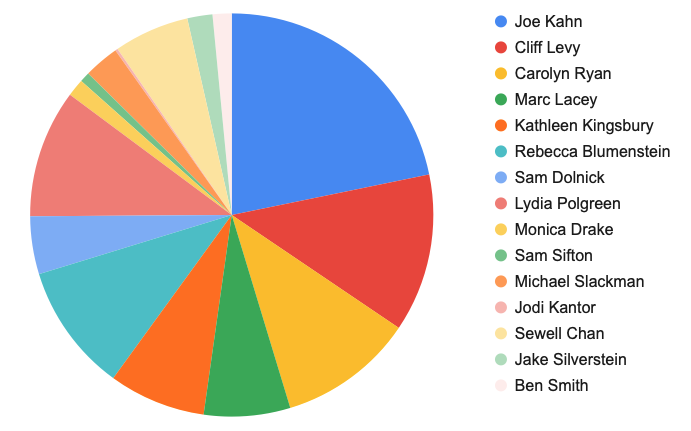 The New York Times Succession Betting Pool is open to all subscribers — if you haven’t placed your bets, click here! — and here’s a recap of the rules: Every subscriber has been given OTR$ 1,000 to wager as you see fit. You can place your bets any time before The Times announces the next executive editor, and all bets will be placed confidentially. Whoever finishes with the most OTR$ bucks wins: three annual subscriptions to gift to your valued colleagues or loved ones, eternal bragging rights, probably some The Fine Print swag, and maybe a trophy. Happy betting!