Farewell to The Believer

Hours after The Fine Print reported on Tuesday that The Believer’s future was in doubt, the University of Nevada, Las Vegas announced that its February/March 2022 issue, No. 139, will be its last. “The Believer consumed a significant portion of [the Black Mountain Institute’s] resources. After reviewing the data with internal and external stakeholders, it was clear that there was no path forward to continue publishing the magazine,” said College of Liberal Arts Dean Jennifer Keene in the press release. “While The Believer is a highly regarded vehicle for both new and established literary voices, we have a responsibility to direct our resources to the initiatives most central to BMI’s mission.”

Founded by Vendela Vida, Heidi Julavits, and Ed Park in 2003, under the McSweeney’s publishing umbrella, The Believer was supposed to inspire, as an essay by Julavits in the first issue put it, “a new era of experimentation, and a book culture that will support it.” In the years that followed, the title would publish literary eminences such as Toni Morrison, Anne Carson, Nick Hornby, Greil Marcus, and William T. Vollmann. They also gave a platform for key works from younger writers, including Leslie Jamison, Rachel Kaadzi Ghansah, and Gideon Lewis-Kraus. A recent media kit said the title counts 5,000 subscribers. One of its earliest was David Foster Wallace. 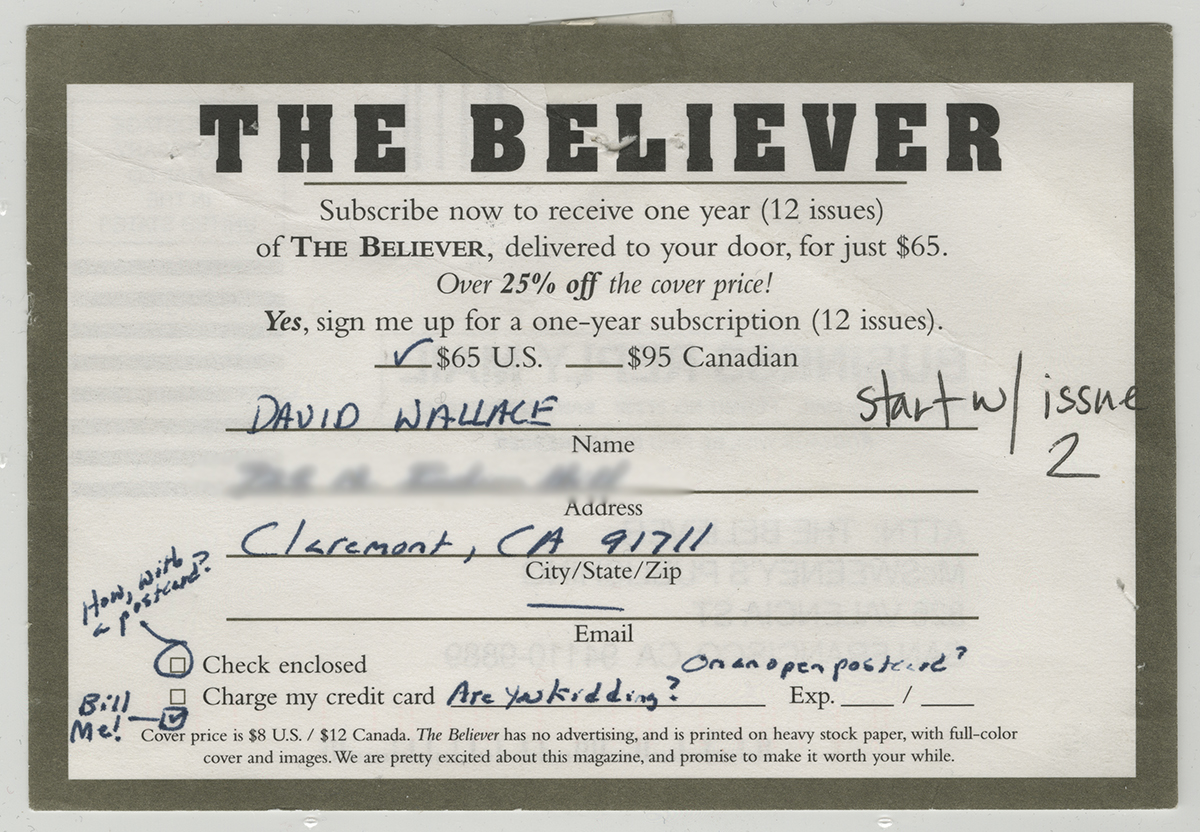 When The Fine Print inquired whether any of The Believer’s current staff would remain employed by the Black Mountain Institute after the publication of the last issue, UNLV spokesperson Karyn Hollingsworth did not evince much sympathy. “Many of The Believer’s publication staff are freelance employees on contract, so this type of business decision isn’t unfamiliar to them,” she wrote. “We are analyzing the handful of full-time positions supporting the magazine’s publication, and we haven’t determined what role they will play moving forward.”

Former staff questioned the claim that the shutdown was unavoidable. “This is such a tragic case of mismanagement. The editors, writers, and artists at The Believer did work that reached far, far beyond the resources they were given,” tweeted former features editor Camille Bromley. “I cannot express how much heart we put into that magazine; it will be a part of me forever. I cried for a solid week when I heard this news. There are so few places left that do the kind of work The Believer does,” wrote former art director and deputy publisher Kristen Radtke in a tweet thread. “Along with this sadness there is a profound amount of rage. The magazine had never been stronger than it is right now, and to abandon it like this diminishes its legacy and work of the writers, editors, and artists so many of us met for the first time in its pages.” Reviews editor James Yeh tweeted, simply, “incredulity.”

Writers from across The Believer’s history were crushed by the news of its shutdown. Gideon Lewis-Kraus was an intern at McSweeney’s when the magazine started and was pulled in from the get-go. “It felt unlike anything else, kind of willfully untimely,” he said. “When we were furiously sending out the first batch of press issues in that March 2003 issue, I don’t think anybody expected that it was going to last almost 20 years. People at that point would have been surprised if it lasted the year.” He’s still grateful that they published his first long piece. “It’s hard to imagine another place that would have taken a chance on,” he said and paused in wonderment, “I mean, I was 23 years old, and that was like a 13,000-word piece or something completely insane. “And now that the magazine isn’t going to be around anymore, he’s sad others won’t have that chance. “I have a student right now who’s working on something where just a week ago, I was thinking, ‘Oh, this would be great for The Believer. I’ll send her to them.’ So it’s a shame that that option’s not there anymore. It’s hard to think of what could replace it.”

“What a monumental bummer,” Tom Bissell wrote in an email to The Fine Print. “When The Believer was brewing, McSweeney’s was basically the most exciting — and, really, the only — thing happening in what I could call youth literary culture. It dominated the scene for a long while. And would continue to dominate until n+1 came along.” Bissell published his first piece for the magazine, in 2003, in the third issue. “Heidi Julavits, a wonderfully acute editor and delightful human being, let me write three ten-thousand-word essays for early issues of The Believer, on topics as unlikely as reality television, how-to-write manuals, and Aleksandr Solzhenitsyn. Who else would have let me do that? Who else would have enthusiastically published that? The Believer wore its eclecticism as a badge of honor.”

“As a magazine, as a collection of voices, it wasn’t there to tear down; it was always there to build up,” Bissell wrote. “Mind you, that was never a stance I was particularly interested in maintaining or even buying into. But now that it’s gone, it makes me think how relatively easy it is to make a name for yourself attacking. It’s much harder to do so exploring.”

New York Times book critic Molly Young had a breakthrough writing for The Believer more than half a decade later in 2010. “This sucks. I love those long conversational interviews and weird features and that creamy, creamy, paper stock,” she told The Fine Print. “Ed Park is a god. He took a flyer on me when I was 23 and helped me turn a pile of mush into this piece. How will young people turn into good writers without magazines like The Believer?”

Rafia Zakaria, who was working on an essay for The Believer when she heard the news, extolled it as a publication that welcomed writers with perspectives that American literary magazines have traditionally ignored. “My essay that I was working on and that was about a teenage love affair and arranged marriage is now homeless,” she told The Fine Print. “I don’t think there is any other publication that is willing to publish these sorts of essays unless, of course, you’re white, male, and connected.”